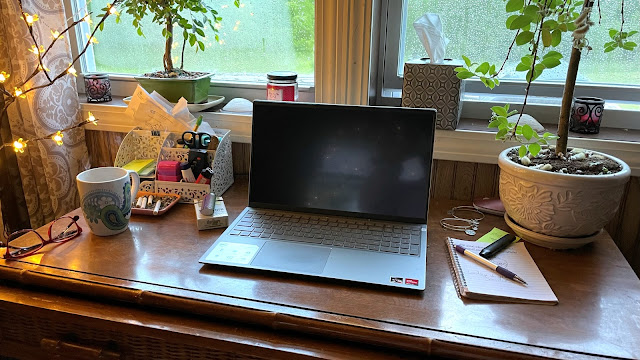 As Nine Inch Nails would say... Every day is exactly the same.

I woke up at 4am, like every other morning.
Well, some mornings it's 3 or 3:30, some unusual mornings I sleep in until 5. But always, up with the sun. Or before it.

Let the dogs out. Make coffee. Light a cigarette. Sit down at my desk. Tell Alexa to play Big104 FM.
Like every other morning.

I had been dreaming. And when I woke up, I spoke out loud, "I didn't get to hear what he said." And then I cried.

Sometimes when I'm actually interested in picking them all apart, I'll write everything down when I wake up. Every detail, every weird thing (and there is always plenty of weirdness), all the nonsense... And sometimes, I can make sense of it all. But this morning, even upon waking, I only vaguely remembered the peripherals, the cast, the plots and sub-plots. There was only one theme that stuck out. Unfortunately.

It was very detailed and ornate, but the general overview was...

I was seeing someone. One day, he got my mail for me (although, we were in some kind of campground, for whatever reason). There was a package, and it was from my ex-boyfriend. Not my most recent one or two. Those were only blips compared to my other relationships. COVID Contingencies, I call them.

No, it was from the other one, the last man I really loved. The man I thought perhaps would be the last in a long line of loves. Sidenote, it still amazes me, the number of men (or women) I've loved. Not amazed as in amazing. There's nothing amazing, or wondrous about it. Amazed, as in, astonished, confounded, dismayed.

It was from him. I opened it and it was a statue of some kind, but I can't remember what. An angel? A flamingo? Who knows. But it was a statue, that was kind of like a music box. But this statue-music box allowed you to record yourself and save it. And that's what he had done. He'd spoken as if to me, recorded it, and sent it to me. There was a tiny note with it that read "Reflecting; long, but worth it."

I turned it around and over and every which way, trying to figure out where to turn it on, how to make it play. My heart was pounding in anticipation. There were so many distractions... children running around, playing loudly, people talking to me or needing something from me, loud 4-wheelers speeding by, flies buzzing around my head that I constantly swatted away, loud music playing from a dance party right next to me, and the man I was seeing complaining about how my ex-boyfriend was sending me recorded love notes. If that's even what it was at all.

After turning the statue over and over a dozen times, I found a little compartment with buttons and switches, and I thought I was finally on the way to working out this puzzle. And as if on cue, "If You're Gone" by Matchbox 20 started playing somewhere in the background. That's it, that must be it. He must want to rekindle. He wants me to "come back home..."

And then I woke up.
Shocker.

And that's when I spoke aloud, even as soon as opening my eyes, "I never got to hear what he'd said."

But I was never meant to hear it. It played out exactly as it should have. Because that man never really did say anything. He was quiet, reserved. No... withdrawn.
But I loved him, still.

And so I cried, the lyrics of "If You're Gone" running through my head.

Get up, coffee, cigarette, desk, Alexa and music...

And again, as if on cue, the song that was on when I asked Alexa to play my radio station was "Goodbye to You" by Scandal.

If singing weren't on the list of things I can't do for 5 weeks post-surgery, I'd go into my make-shift recording studio and sing that song right now, for therapy. I just bought a set of conga drums, maybe I'll go bang on those, instead.

Pre-programmed. The whole fucking morning.
The morning ritual, the dream, the moment of waking, the music. The coincidences that weren't coincidences. And me, still pining over a relationship that ended over two years ago.
Sigh.