The Epiphany That Wasn't an Epiphany 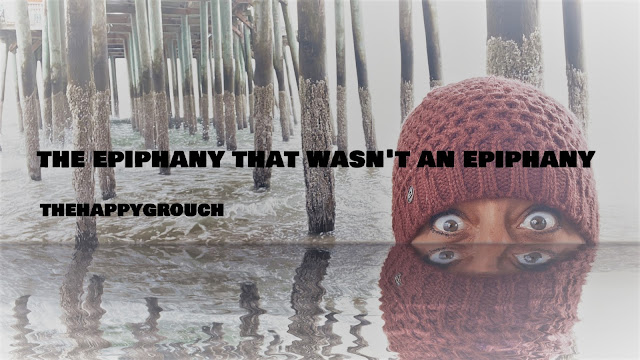 Today was a great day.

And then it wasn't.
Oh, hello there, depression. So nice to see you again (eye roll).

Let me preface this with- No, I'm not suicidal, so don't freak out. Morbid? perhaps. Cryptic? Perhaps. Suicidal? No.

Also- No, I'm not attention-seeking. Trust me, I'm good with the whole no attention thing. Really. Look away. Go away.

Also- I'm not pity-seeking. As a person who suffers from bipolar depression, I feel bad enough for myself. I don't need (or want) you to.

I just write to feel. Or, to unfeel. It helps.
Sometimes.

Wait, one more thing. Please stop with the "you won't be happy until you do this, or stop doing that..." Or the "happiness is a choice, you choose to be miserable..." bullshit. PLEASE. You obviously have no idea how unrealistic, how absurd, that is for people who are clinical. Just quit that shit. Ok? Ok.

Today was a great day.
I played a gig at an outdoor craft fair/bizarre/festival thing. To say we were well received would be a HUGE understatement.
There were a lot of people there, of all ages. We had 8 to 80-year-olds telling us how wonderful we were. How awesome we were. All day long.
The former owner of Spectacular Events Center said- Where were you guys when I was in business?!
There were several people who were obviously musically inclined because they were very impressed by our harmonies, our chemistry, our sound. That's the kind of stuff I really appreciate because I do believe that's what sets us apart from other local small acts.
Friends I haven't seen in a while were there. Other friends, too. My aunt, cousin, mom, and son showed up. That was really nice.
We were paid more than we charged, and the tips were plentiful. All said and done, I made enough to give my partner another chunk of money towards our new sound system, and then go shop all the local vendors. Although I might have walked away with nearly my weight in fudge.

Yes, it was a great day.

On my drive home I wondered whether or not I would go down to my partner's place and join the party that was happening down there. Lots of people I know. Lots of good food, drinks, lawn games. We'd play some more music...

But it's a long drive from my place. It's an even longer drive back, in the dark, after having a beer or two. And it's not just that. The ride would just be so much more tolerable, and the night would be so much more enjoyable if I had someone in the passenger seat. Or the driver's seat. For the ride, for the company, for the sake of not feeling like the 3rd (23rd) wheel... Just for the sake of not going somewhere alone. Just for once, fah fahk sake!
Nah. I'll stay home with the dog. Eat some fudge for dinner. Have some leftover Chinese for dessert.

On my drive home I also wondered (again, still) why I have had such a hard time singing these last several months. Why my ears have been so closed-up. Why my throat has been so strained, so weak. The first six months or so singing in this act, my voice came back stronger than I ever expected (after being out of the business for a dozen years). It was awesome. And then it changed. First I blamed it on winter and forced hot air heat. I got humidifiers. I bought extra special filters for my furnace and heat vents. Then spring came around, and I blamed it on pollen, allergies. In comes the persistent cough, unaccompanied by anything else, that refuses to respond to any amount of cough suppressive I throw at it. I blame it on allergies again. I'm not sick, I'm fine. Couldn't be smoker's cough. I've smoked 30 years and have never had smoker's cough.

And yes, you probably see where I'm going with this. Might I be a bit of a hypochondriac? Not usually, but maybe. Then again, it's all too realistic. Probable, even.
Then I think... well, I guess now I don't have to quit smoking, right? If I already got the "cancah," quitting now makes no sense (Nice logic, huh?).

But none of that is even the point here...

The real point was when the epiphany came...

You see, I've always been afraid of dying. "Mortality anxiety," I call it. Mostly because I'm not "of the faith," so I don't believe there's anything for me after this. It'll just be a shutdown. Just a big nothing. There won't even be consciousness, so how can we even call it "nothing?" Or anything?  Anyway...

But today, on the way home in my hypochondriac (yet realistic) state of mind, thinking about the cancah takin' me, I thought...
You know, if it did, I'd be ready. I'm not scared anymore. I'm all done here.

I've raised my kids, they're grown and no longer need me. And they've turned into amazing humans. I haven't "made it big" as a singer. I never did get a degree out of the hundreds of credits I have. Never finished beauty school, police academy, or anything else, for that matter. I don't have a lot of friends. I'm not working, and certainly don't have any hope of a "big career" at this age. I have no life partner. I've had three husbands, tried that. I've lived a mundane (yet maybe a little bit interesting) life, with no real impression to leave, no accomplishments, no more purpose to fulfill, other than what's already been done. Life has plateaued where it is, there's no more/other destination. And I'm sad more than I'm happy.  Besides, I'd like to go when I'm still kinda pretty.
There's nothing here for me anymore. I'm ready.

The more I think about it, the more I realize it really isn't even an epiphany. It's a feeling that's been growing for a while, I just didn't see it for what it was.

My home has almost always been presentable, neat, tidy, everything in its place (just ask my kids, or my three ex-husbands, I was kind of impossible to live with). Now I have literal piles of clothes in my room (there are more clothes than there is floor space). And yet, I have three dressers and two closets. My bathroom has been partially painted for three months. Dropcloths, paint cans, brushes, rollers, all still clutter the floor, the bathroom counter. Dirty dishes are always in the sink. Stuff all over my kitchen table. A fridge, freezer, and cupboards jam-packed with food I'll never eat. Trim pulled off various places around the house, new trim laying around on the floor waiting to be put in. Dozens of projects started, never finished. And I really don't care about any of it.

I buy shit I don't need. I spend when I can't afford to. In fact, the only really "big" thing I've accomplished (other than raising the kids) has been accumulating credit card and student loan debt. And, like the house, I don't really give a shit about any of that, either.

I haven't landed that job that I really want yet (whatever that might be... I don't even know what I want to be when I grow up). Still unemployed. But, I've stopped giving a shit about it.

All the junk food I eat is catching up with me. My midsection is growing. Nope. Don't give a shit.

Today I wore sandals, in public, to a gig, without my toenails painted. In my world that is a HUGE no-no. But, you guessed it, I didn't give a shit.

And even now, while I'm really quite sad and have shed far more than enough tears for the day, I also kind of don't give a shit. I don't feel depressed. But I know that's where this comes from. At least, I think that's where it comes from. Then again, maybe it just "is what it is." Maybe it's just a natural, final state of mind.
The epiphany that wasn't an epiphany.

Jeezus, now I sound crazy even to me (facepalm).

Which probably means it's time to put away this proverbial pen, go flop my ever-growing ass on the couch, and stuff my face with fudge.