I'm Fine, Save Me 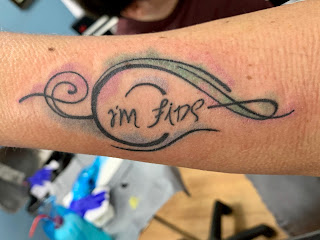 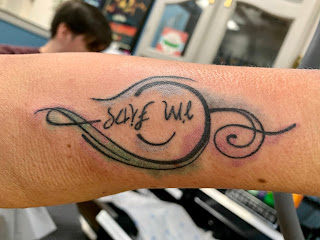 Don't ever judge someone or make jokes about their complaints or pain. You don't know their story. Depression is a silent, private, unrecognized monster.

And it has been mine for as long as I can remember.

I've been wanting to get this tattoo for a few years now. Originally, I designed it to be inside a heart. But when I got to the shop, we redesigned it into a treble clef (G clef), because of my love of music. And because often, it has saved me.

Many are asking... what does it say, and why?

Read upright, it says "I'm fine." Read upside down it says "Save me." It is an ambigram; a word or phrase that can be read in more than one way or from more than a single vantage point.

Its origin is a depression and suicide awareness campaign by an organization called Samaritans of Singapore. The campaign uses a few clever ambigrams to "highlight the difficulty in identifying and understanding depression." The ambigram campaign's point is "The signs are there if you read them."
Clever Upside-Down Ads Reveal the Subtlety of Depression


This particular ambigram gained recognition in 2015 when a young college student got it as a tattoo on her leg to symbolize her fight with depression. She posted a picture with her story on Facebook, and it caught on like wildfire.
Bekah Miles Facebook Post

And so, it represents the same for me. My battle with bi-polar depression all these years. How it has adversely affected, and in some instances ruined, my life... personally, professionally, financially. There is NO part of your life that the silent monster doesn't touch.

I fight it every day. The majority of days, I win. You know how you can tell? Because- I'm. Still. Here. But, trust me, there are many days I don't want to be.

Some people do not win their daily battle. Like my son's step-brother and lifelong best friend, Jayden, who took his own life at age 13. This tattoo means even more to me now than it did when I designed it years before.

It encompasses that endlessly painful day I spent at the hospital with my son and Jayden’s family. The disbelief. The shock. The heartbreak. How helpless I felt, how I wanted to pull the pain from all of them, and rid myself of it as well. It remembers Jayden. It encompasses what we all experienced that day, and the days, months, and years since. What my son went through, and Jayden’s mother and his siblings. And how they still struggle with it. They fight every day now, too.