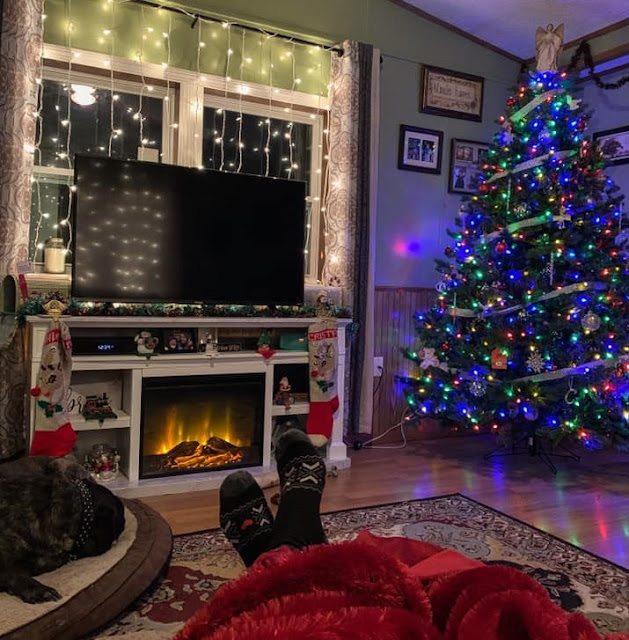 Sitting here home alone in my pjs, watching the "Home Alone" marathon.
My boy looked so much like Macaulay Culkin back then. I used to say to him- "Do the Home Alone face!" Hands up to his cheeks, mouth and eyes agape... Recalling it still brings me a chuckle. And a twinge of sadness.

I read a phrase somewhere on Facebook this week that went something like...  As a kid, we think the best thing about Christmas is opening our presents, but we didn't know there would be something even better; watching our kids open their presents.
And it's so true. I get so excited every Christmas, waiting to see my kiddos open all the cool stuff. I haven't slept all week. Bedtime has been sunrise every night... day... whatever.
I overspend every year, and I'm not sad about it. I'll go into debt for as many years as I can afford to, in order to spoil the two most important humans in the universe. And Mom and Nana, too. Someday I may not be able to, who knows. So while I can, if I can, I will.

It was such a wonderful day. Presents, food, laughter. But, as with everything, all good things must come to an end. It's hard to believe, difficult to imagine, that I could be so sad after such an amazing day. But it's like this every year. I fondly (or, not so fondly) call it the Christmas crash. It historically comes just as soon as the festivities are over.

Some years are harder than others... The year we lost Dad, or Jayden, or Doreen. Dad has been gone just over 6 years. Jayden, three. Doreen, a little over a year and a half. Those losses still make every year painful. The passage of time helps to turn it into a dull ache, but it still hurts.

This year we've managed to avoid major tragedy. Others have not been so fortunate. Just within the last couple weeks there were several area fires. People lost belongings, homes were damaged. Some were destroyed, and the families lost everything. Two nights ago, a man I know got hit by a car crossing the street. He had severe internal bleeding, a fractured pelvis, and has had two major surgeries, one was today.

And so, I try to count my blessings. I really do. But still, the Christmas crash comes.
Although I've not experienced what others have this year, I still have my own sorrow, my own little tragedies. And my mind, which is eternally my own worst enemy.

This year brought an end to yet another relationship. I really thought this one may have had some staying power, despite our differences and slight incompatibility. But, just as I always said about the Brookside (and about all the other men I have loved, for that matter)- it always meant more to me than I did to it.
The difference between this one and the others is that this end was by my hand. Well, that's not necessarily true. I technically ended things, but I was just being merciful; because he had (mentally, emotionally, physically) checked out of the relationship long before that. And probably that's what makes it hurt so (still).
Sigh.

The short-ish version of that long story is...
I always wanted a Bernese. I discovered early that Nara came with a host of medical issues. The breeder gave me the option to give her back, but I couldn't (despite the advice from my vet and my unbiased friends). I threw money at the vet and got her healthy. Still there was hip dysplasia. I threw money at the orthopedic surgeon. No surgery yet, she's not done growing. Supplements, low impact exercise, watch and wait, determine and provide what she needs as it progresses.
After a few months I realized she needed more than I could provide (financially and lifestyle). I recently let her go with my friend, Nette (who has been asking if she could take Nara since the day I brought her home). She lost her Bernese earlier this year. She works at a local vet's, and even lives above the office. Nara spends her days socializing like the Queen of England, greeting clients and playing with all the other dogs at the onsite doggy day care. She gets the lifestyle her breed requires, and will get all the medical care she needs.
I miss her very much. Do I regret it? Of course. I regret all of it.
I regret taking her. But when I took her, she needed me. And probably I needed her.
And I regret giving her up. But she needed what Nette can give her. And Nette needed her, too.
It was the right thing. But I miss her so.
Sigh.

Dating since the last heartbreak has been less than successful. The first one shocked me; I got my feelings hurt. I guess I should have expected that, though. I knew the guy. I knew the risk. Practically handed me a bouquet of red flags. And just like a bull, I saw red and charged right in. Duh.
And I was fresh out of a relationship, still tender and bruised.
So, hurt feelings meant closing it all back up. Build the wall, brick and mortar.

Six months later and I decided to finally try a date. It wasn't a disaster, I suppose. Until he turned weird a couple days later. I stopped answering the texts and they stopped coming. Phew.
A week or so later I decide to try another date with someone else. And then two more. Three dates, one person. Also not a disaster. It was interesting. Potentially could have been something? I don't really know. And that unknowing was evidence enough. Additionally, I would just be getting myself into a other incompatibility situation. And we all know how that last one turned out.
Sigh.

This year also brought about the end of my boy living with me. Again.
After years of staying with us both, and then primarily with me for a long time, a few years ago, he left. One week he just said- I'm going to stay another night at Dad's. Another night turned into years. Two years? Three? I don't remember. Then I left the lake, bought this house to be closer to him. After a year, he came back home. What a relief, and a miracle; it saved my life.
That lasted for about a year.
He's been gone for about seven months or so. I get short visits about once a week, sometimes twice, sometimes none. Sometimes he'll just stop over out of the blue. Sometimes I have to nag or guilt him into coming over.
Although he still knows where to go for an emotional safety zone; when he needs counseling or to have an unfettered meltdown. I always get that part of him, always have. But his dad's house has all the cool stuff. The big house, two garages, a shop, dump trucks, backhoes, sleds, four wheelers, etc, etc.
It's the same story I've been telling for years.
Anyway...

My job is (jobs are) trying. I have said so many times the last couple years- the older I get, the more intolerant I become. I need to retire my bartending hat soon. Before I become a felon.

As trying as this industry is, school is even more so. I hate school this semester. Didn't like it much last semester, either. But this one has been even worse.
I have enough credits for basically a Bachelor's and a half. But I fear I'll never get a degree. Despite my many credits and tens of thousands in student debt.
Sigh.

I started going through my Christmas pictures (that I'll post soon). I've decided to devote one album to just those pictures that we'd all rather not share. I think I'll title it "Christmas Faces That Make us Cringe." We all have them, the not-so-flattering photos that are absolutely hilarious to everyone else. Yep, that'll be posted first.
It has been a useful self-help/healing project tonight.

Until I took the trash down the road, and as if on cue, iTunes launched into "When the Party's Over," by Billie Eilish.

And I cry a little more.
And my favorite parts of Maya Angelou's Amazing Peace; A Christmas Poem come to my mind...

... In our joy, we think we hear a whisper.
At first it is too soft. Then only half heard.
We listen carefully as it gathers strength.
We hear a sweetness.
The word is Peace.

... We tremble at the sound. We are thrilled by its presence.
It is what we have hungered for.
Not just the absence of war. But, true Peace.
A harmony of spirit, a comfort of courtesies.
Security for our beloveds and their beloveds.

... We clap hands and welcome the Peace of Christmas.
We beckon this good season to wait a while with us.
We, Baptist and Buddhist, Methodist and Muslim, say come.
Peace.
Come and fill us and our world with your majesty.
We, the Jew and the Jainist, the Catholic and the Confucian,
Implore you, to stay a while with us.