Skip to main content
on March 22, 2019
I apologize for the cryptic posts on Facebook this week. But things are pretty dreary for me right now.

My boy and I had a huge fight Monday. It was the ugliest fight I've ever had with either of my children, and it ended with him packing his things and going to his dad's. If we've spoken at all since, it has been primarily through text about him getting the rest of his things, and it hasn't been pleasant.

I'm too demanding, too hard on him, I nag too much, I'm not understanding.
And yet his sister tells me I'm far too tolerant, a pushover, even... "You would have NEVER let me get away with HALF the stuff you let him. If I'd ever spoken to you the way he does, you would have punched me in the face!"
But to him, I am all of those things.
I said to her, "Not to diminish what we have or what you mean to me hunnie, but most times I feel like your brother is all I have. You are grown and out on your own, and I couldn't possibly love you more or be any prouder of you. But he was all I had left here. He was all I focused on, all I cared about, all I've built my life around."
And it's true. He made my life worthwhile, meaningful, whole. Now it's just.. not.

But he could also push my buttons better than any person I know. Well, second to his father. Funny story about that... Norton (RIP), a very good friend of ours, was arranging a betting pool at our wedding (we fought like cats and dogs). Because my boy has much of his father in him, I think it makes our challenges that much more difficult.
Anyway...

Everyone keeps saying- it'll come around, just give it time, bla bla bla. And maybe that's true. But him and I have a history of disconnect. You've all seen it, watched me go through it. And as much as he thinks I don't; I understand him, I get him. Once it finally calms down, however long that may take, he'll have become more comfortable staying at his father's again. That'll have become home to him, and my home will be foreign. As it happened before, when he stayed with his dad for a year. And then as it did here at my house, this past year that he's stayed with me. It's just the way it works for him. The last thing he said to me this week was that we need a break, a long one.
I don't expect him to come home. I wish it, but I don't expect it.

And who knows what our relationship will be moving forward.
You know, I've seen people over the years who don't have close relationships with their children, or with their parents. And I've always thought- That's so strange, and so very sad. How can that be?? And now I know.
This is how.

And so I've just been trying to get through the week. Through each day. The day after our fight, Tuesday, was a tough one. And more than slightly embarrassing. I couldn't keep my shit together even though I was working. I had several breakdowns throughout the day. Sometimes I managed to get to the bathroom or out back first, sometimes I didn't.
My last customer of the day, Kate (god love her and her brutal honesty), sat down at the bar and ordered her beer while chatting away to the others. When she finally looked up at me she said- "Jeezus! What the hell is wrong with you?!" Evidently by the end of the day, I looked exactly how I felt.

The rest of this week has been more of the same. Passing time, trying to stay busy, occupied. Trying to keep it together. Crying hysterically one minute, silently furious the next.

And once again my house feels empty.

I have the cat, and the dog. And yes, I only have Blaze now. Walter has a fantastic home with my friends (and some of you know them as well), Robin and Tyler. It really couldn't have worked out any better for him.
I will be a one income household again. Things will be financially tight enough as it is, I'm quite sure being able to afford one cat and one dog will be challenging enough. And it'll only be me here. I may have to work more to make things more comfortable, and I start school in may. I'll be very busy and I won't have anyone to help manage everything.

Oh, because if you didn't already know, Phil and I recently had a discussion about our living arrangements. More specifically, how they need to change. I'll admit to being the protagonist of that conversation. I just think it best, for all of us. I can't speak for him, but I am confident that he will be happier back in his hometown, where his children are, and not 100 miles from work.
And not living with the miserable version of me.

Even before my boy left, I was miserable. Well, maybe not miserable, that's too harsh. But definitely not joyous. I tried to get used to sharing my space again, to living with another person/people. I tried for months, and I failed. I became even more difficult to live with than I already am. I have been snappy, knit-picky, intolerant, unkind, even, at times. And no, I don't like myself for it.
And yes, it is so goddamn ironic. For the longest time, the past few years, I have whined and complained about being lonely. Evidently, somewhere along the way, I grew accustomed to living alone.
Anyway...

Speaking of living circumstances... My old lake landlord, Tom, emailed me a couple of weeks ago to let me know that one of his properties would be available this summer. It's the little cabin across the street from the lake, the one I first moved into in the fall of '15.
It's much smaller than what I have now, and it would be going back to renting. I have been weighing all the pros and cons.
As far as owning this place... I'm not sure I'd stay here long-term even if the lake weren't an option. Sooner or later I'd probably want to move again. I think it's a wandering curse of some kind. I am my father's child.
And, although I try not to make decisions while I'm this upset, given the recent course of things, I feel like I have no reason to stay here anymore.
And even though that house isn't directly on the water, I'd still have a great view. And I'd have unlimited beach access right across the street along any of Tom's other three properties (his other two rentals, and his). He is actually hardly ever up here, maybe one week out of the summer. So I would have his beach to myself all spring and fall, and the majority of the summer.

This was the one, when I lived there (you can click to view larger)... 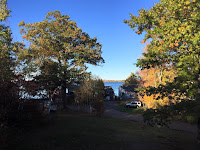 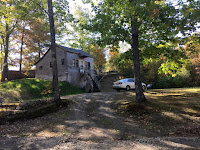 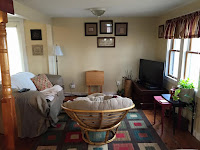 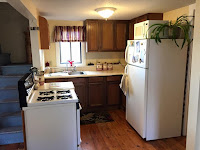 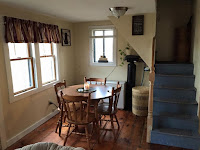 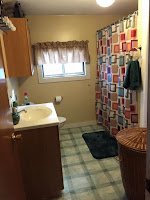 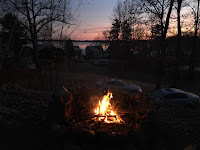 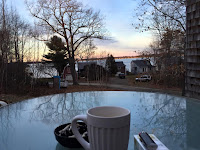 The boy told me (before our fight) that he didn't really want to move back there, that this place was home now. He said that if it were the other house we were in, right on the beach, that maybe he wouldn't mind (I think because that house was quite a bit bigger?). I told him that I would take that into consideration, but ultimately it would be my decision.
Now of course, that's moot.

I am leaning towards going back. Although I am trying to work out some details with Tom. He is still hesitant about the dog (he has a strict no pets policy). Last summer he was going to allow him when I was considering his other beach property (that I eventually turned down because of it's cost). So I'm hoping that'll be the case again. He's difficult to nail down. I need to get confirmation from him so I can either disregard this, or start planning, if I do decide to go back.
I would need to sell this place. I'd advertise it for sale outright to begin with. If I don't have any luck, I will sell it back to the folks who financed it to me. I'll take a bit of a loss on my deposit, but it's an option.

I dragged myself up by my heels, and went out with two girlfriends last night. I sung a few songs at live band karaoke, and the girls and I laughed and laughed all night. Although the respite was temporary, it was just what I needed.

I have hardly slept or eaten all week. Today I sit here with a pounding headache and a bag of frozen peas on my head, trying to make myself get up, clean stuff, run errands, something.
I'll meet a few girls again tonight for dinner. I have to keep moving, mentally and physically.

Thank goodness tomorrow is my Monday and I'll at least have work to focus on for the next few days.