I've been up since 4am. I've been awake off and on all night. I couldn't really sleep.

The auction came and went yesterday, and with it, came the end of an era for the little bar on the corner, the watering hole, the hole in the wall... the place that so many people call home, employees and customers alike.
Our family is being disbanded.
And to add insult to injury, the winning bidder at auction was Charlie, the man who began this from the start, the man originally pursuing the civil foreclosure months ago.
Long story short... While he was operating the business a few years ago, he made a substantial loan to the owner of the building, Jane. She didn't pay him back all of the money owed, so he placed a lien against the building. He ran the business into the ground, turning over employees and driving away customers, racking up debt associated with the business. Jane eventually evicted Charlie, took the business back over, and then leased it to my bosses, Matt and Annette, with the agreement to sell to them once she "took care of the loan with Charlie". Matt and Annette worked diligently to pay all the debts associated with the business that Charlie had incurred. They turned that bar around completely in the last few years. In the meantime, and unbeknownst to us, Charlie was preparing a lawsuit against Jane for the money he was owed and the lien against the building. That eventually went to court, and she went completely unprepared. The judge found in Charlie's favor, for a ridiculous amount of money, and he was able to file a civil foreclosure based on the money he was owed. And that is where this all started.
Once his foreclosure was filed, the bank that held the first priority mortgage decided to also foreclose, which essentially wipes out all subsequent 2nd, 3rd, (etc) mortgages (including Charlie's), and held their own auction.
And here we are.
That's the long and short of it. I know, its a bit confusing.
But anyway, Charlie won the auction.
And to top it all off, while in the conference room, after winning the auction, he had the balls to say to Matt and Annette- "You guys can stay right there, you guys can continue to run it"... Well, that set Matt into a flurry... in a conference room full of attorneys and bankers... Leaning over the conference table, pointing at Charlie sitting in his chair, yelling... "I'm not running shit from you, you fuck! The last time you ran it, you ran it into the fucking ground! I'll be seeing you around, mother fucker!"
I have to say, I was more than a little bit proud of him. Even though I was devastated, I left that room smiling.

And then we all went back to The Brook. We told the other employees, our friends, our customers, our family. It was like being at a funeral. We accepted hugs and condolences. We drank. And drank some more. We gave out condolences. We cried. And cried some more.
The place filled up with regulars, as I suspect it will for the next nine days.
That's all we have. Nine days.
Our liquor license just happens to expire on the 2nd of November. It obviously makes no sense to pay the couple thousand dollars to renew knowing we are closing, so that will be our last day.
Nine days. The end of an era. A family disbanded.

And I'd be lying if I said I wasn't also devastated about losing my job.
I don't have a significant other who works. I don't have a second full time job.
I'm so scared. I'm afraid of losing my house, or my car. I'm afraid of not being able to pay my homeowners insurance, my car insurance, my cell phone bill. I'm afraid of having to cancel cable, or internet. Or quit smoking, or quit Dunkin. Oh hell, who am I kidding, like Kristina said, I'll quit eating before I quit smoking.

Fortunately, an opportunity did present itself at just the right moment. My old boss from Ramona's (the nice young man that I trained behind the bar over ten years ago, who now owns the place), asked me if I'd like to come back to work down there. It would only be part time, and it would be a significant pay cut, but at least it would be something. I'm not sure what the tip potential will be, I guess I'll have to see when I get going. I will most likely still need to get a second job to make ends meet. I'll have to keep looking for something that will work around my hours in Bucksport.
As of right now, it looks like I'll be tending bar down there on Tuesdays and Wednesdays from open to close (2-11ish), Fridays 2-7, and some Saturday nights if a second bartender is needed. I am really hoping that some of my Brookside customers who live in the Orrington area will come and see me in Bucksport. It's just a hop skip and a jump away. One of my favorites, Grumpy Jim, said he'd come down. I said- "Oh Jim, you'd really come down to Ramona's?" And he said- "I'll have to! It's the only way I'm going to be able to see you!" Kinda made my cold, black heart melt.

It will be easy to start back up there, comfortable. It's almost like a second home for me down there, too. I know everyone there, from my years and years of working there. It will be nice to see the old faces across the bar again. And I think they will all feel the same when they see me back behind the bar. Many of them have told me, and continue to tell me how much they miss me working there. So it will be nice. And an easy transition.
Now I just need to look for a second job to fill in the financial gaps.

I am scared shitless.
My job, my income, my comfort, my stability, has been taken from me.

And a family disbanded. 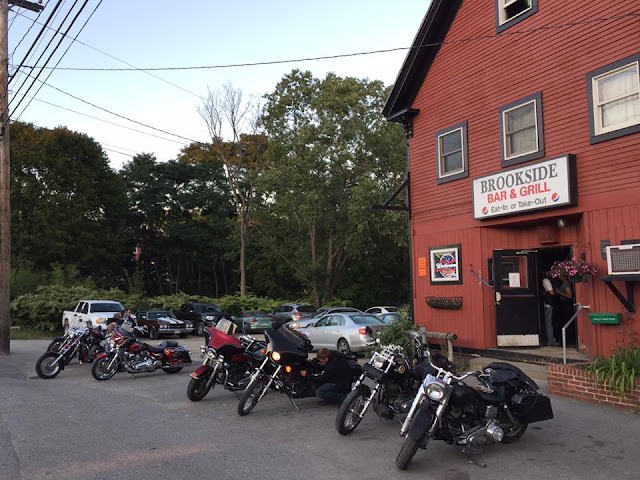