Skip to main content
on April 30, 2017
Just some random crap that I needed to get out by "putting on paper"... I mean, it is Sunday coffee and blogging time, right? Even if it is coffee at 8pm.


You don't truly appreciate everything you have, until the ability to provide it for yourself it is at risk.

And, regarding the aforementioned statement; fear is truly crippling.

But even in general, fear is SO powerful. Fear of death, fear of the unknown, fear of being alone, of heartbreak, poverty, illness, war... Airplanes, heights, boats, electricity... Jeezus, I could go on all night.

No matter what their age, 15 or 45, boys will always have the innate ability to break your heart.

Living alone is not empowering or liberating. It's just lonely.

Facebook is the new free dating site. Better, even (or worse), than Plenty of Fish. Just post your "single" relationship status publicly and highlight your best selfies. Voila. Keepin' it classy. Best of luck to you.

The passage of time truly does help you to forget about someone. My (lack of a) relationship with my sister is evidence of this. As close as we once were, I hardly remember it now. That should be sad.

Sometimes I think that the secret to sanity is forgetting. Being unaware. That's why so many people drink, or do drugs. I could only be lucky enough to become an Alzheimer patient. Forgetting, being oblivious, not caring, just might be the only way to stay sane. Being aware is a curse.

But I haven't forgotten my father.
The longer I'm alive, the more I experience in this life, the more I understand why he self-medicated with alcohol. I may be devastated and angry as hell that he let it kill him, but jeezus, I get it. I always said we had similar minds. And no wonder he drank as he did. I often wish I were an addict, just to be able to get out of my own head, even temporarily.

I complain about having to be nice to people all day at my job. The truth is, I enjoy what I do. And I enjoy (most of) my customers. However, there are a few I could live without. Even punch in the face, if I could. The non-tippers. The lousy tippers. The customers who think (and sometimes even say), "oh, you just tend bar, you don't really work". The customers who look down on you for what you do, who think that their 9-5 professional job is so much more important. The ones who treat you as just a servant, and act as if your only purpose is to attend to them.
Again, I could go on all night.

My customers/friends are funny. The other night after work, one of them was joking around with me... Saying that I was going to go home, eat my bugles, and be sad. She said she often worries- will this be the day that Crista walks into the lake and doesn't come back out? As off color as it was, it was funny, we all laughed, I laughed.
And then I cried all the way home. And most of the night. As funny as it was, she was right. Although, I skipped the bugles and opted for ice cream.

Seriously, though. I'm truly tired of being this damn sad all the damn time. It's exhausting. Pretending not to be is exhausting, too. Everything is exhausting. Maybe it's time to consider meds again. Jeezus, I hate that idea. Maybe I should just start smoking weed with the rest of the population. It is legal now. Maybe I should see what all the fuss is about.

I'm currently addicted to a show called "Sense8". It's really good. You should check it out. It's sci-fi, but realistic. It's intense. Lots of character development. Very cool story line. Original. And the sex scenes are pretty good, too.

Anyway... I've got to get back to my show now. It's very important, you know. Important stuff, watching Netflix. Wicked meaningful.
And besides, the cat needs me. Not really, but I like to pretend she does. 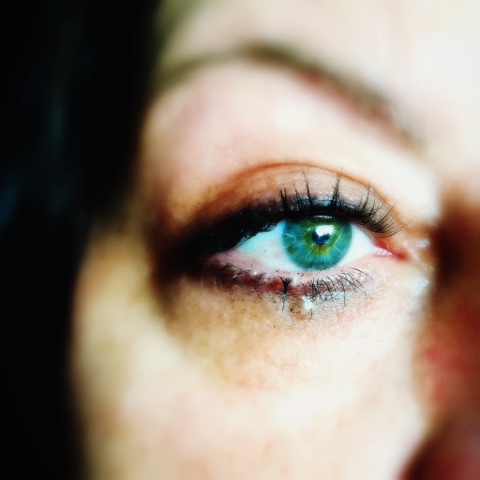