And as I sit by the lake on this day, I (admittedly) can't fully embrace the memory of 9/11. I (sadly) can't sympathize with the tragedy of 15 years ago.
I can't, because I am too busy worrying about my small (tiny, actually) circle; myself, my children, my mother. My circle's struggles and challenges, it's present, and it's future.
As per usual. 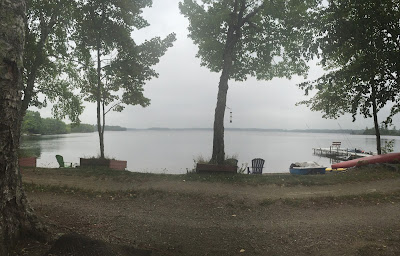 It's foggy and muggy, and eerily quiet here this morning. And lonely. A few months ago, I may have used terms like beautiful, peaceful.
Today, and lately, really, it's just, somber.
Perhaps it's the weather. Perhaps it's that I am alone. Perhaps it's PMS.

It's been a tough weekend (what's new, right?).

Dawson is at his Dad's, as he is every weekend. Three days a week he is gone. Three days of fighting the urge (and most times, losing) to cry every moment. Three days of wishing the time away until he returns.
Norman Bates's mother. Sigh.

The first real week of high school is now under our belts. Already there are academic challenges, primarily in math. And I am absolutely no help to him there. Fortunately I had opportunity to talk with his guidance counselor, and she switched his study hall rooms around. He'll now be in study hall with the math/science tutor.
He is stressed out about school. He only alludes to it, never actually admits he is. But I can tell. Last week he was very quiet on the drive to school. He was so upset over his math homework. He did feel better after meeting with his guidance counselor and switching study halls. He was in good spirits Friday, and he went to the homecoming football game Friday night. I pushed him to go, and I'm glad he did. The more things he gets involved with, the more peers he meets, the more comfortable he will feel.
I had offered to pick him up from the game, but his father arranged for him to ride home with a fellow student, which, as you may have guessed, I was definitely not crazy about. And, as you may have also guessed, that propelled me headfirst into a two hour long anxiety attack. I actually worked myself into a good one on my way home from work, imagining them speeding, careening off the road, getting ejected from the vehicle.. you get the picture. It was a pretty awful couple of hours. But he made it home. Texted me on the way home and as soon as he got there, as demanded. Phew. (ugh)

This weekend he sent me a snapchat picture of a four wheeler, captioned- "Buying this at the dealership now". Low and behold, he was pulling my leg. But I didn't find that out until several hours later. But for those several hours, I had myself a mini pity party (schocker, right?)... Feeling horrible that I couldn't afford to get him such nice things, and his father could. Feeling like I'm not giving him enough. Dad's place has all the frills; snowmobiles, dirt-bikes, four wheelers, a camper, guns, brand new vehicles, big fancy house, lots of land to play on... I'm not doing enough, providing enough. I'm not giving him a fun, memory filled, highly enjoyable childhood. Blah, blah, friggin blah. And yeah, I know, I provide him with so many other things that he'll remember later. Yadda yadda yaddda. But it sure would be nice if I could afford a few new toys or fun experiences along the way.
I have a lake. Yeah, I know. But we haven't always been here. And there's no guarantee we will be for a long time. And so, what have I really given him? A few broken relationships. Several different moves. I think I've given the kid more challenges and broken hearts than anything else. Someday when he's older, I hope he'll forgive me for all of them.
Sigh.
No, I don't need reminding that I'm doing my best, that he feels loved, that I'm giving him plenty, that he'll remember this, that I'm an ok parent, blah blah blah.
I guess I just needed to wallow.
Ok, I didn't need to. I do it plenty. Far too much. Yeah, I know.

Random... I saw a commercial this morning about portfolios, and investing, and markets, and blah blah blah... And I wondered what it must be like to live that way. To wonder about your stocks more than you wonder how to pay the next electric bill.

I've also spent the weekend worrying about Logan. Her and her boyfriend now have less than a month to find a new apartment that will accept their two dogs. Nearly impossible.  And they have a limited income, as many young adult students do. She can move home to her Dad's, or in with my mother. But those offers are extended only to her and Phineus (her great dane), for reasons I won't bother to go into. If I had room for her here, I would have her live with us. Hell, she could, I guess, if she didn't mind the couch, or bunking with her brother. But she wants to be independent, stay with her boyfriend, find another place on their own. I wish I could help her, but I can't.

This weekend I also happened to catch a glimpse of my ex-husband's facebook post. No, I didn't go looking. It showed up in my newsfeed because he tagged a mutual friend. What a pleasant surprise that was. Ah, how lovely. A family getaway to Old Orchard Beach. Ironically, in what looks like the same inn that we stayed at when we went a few years ago. How appropriate. Photos of my (former) step-daughter, the girlfriend's daughter, their quaintly decorated room... And yes, it upset me.
Why? Exes are exes for a reason, I chose this life, blah blah friggin blah...
I don't know. It just did.
There he is, doing all the things we used to do, with his new family. Making memories, building a future. Probably getting ready to be married for all I fucking know.
And here I am. Sitting by the lake alone, my future uncertain, writing this obnoxiously self-piteous blog.
Well, hopefully it's pouring there today too. Pfffffffffft.

Yesterday at work was tough. I enjoy the day shift because I typically don't have to deal with the craziness that accompanies the nights. But once in a while, you get the daytime crazies. Yesterday was that day. I was able to grin and bear it like a pro, though. Evidently I've still got that ability. Although, I did keep repeating under my breath- Is it 6ofuckingclock yet??? I actually poured myself a shift drink at the end of my day. A little Baja Rosa on the rocks. Yeah, I tried. I ended up giving it to one of the girls. I can't even drink anymore, fah fahk sakes.

The rain has driven me inside, and I've turned on my television simply to drown out the silence. It's on CNBC. And I'm suddenly ashamed of my limited knowledge of current events. I have no idea about the current state of affairs in politics, crime rates, national protests, the stock market, the illegal immigrant population, who's leading who in the polls, who's building a wall, who's being investigated for what... And I find that I don't really care. Because, as I mentioned earlier on in this blog, I'm far too busy worrying about my tiny circle.
Myself, my son, my daughter.
Maybe I should become more educated, more aware, more worldly knowledgeable. But I probably won't. And I'm ok with that.

And I'm on my last k-cup, which means it's probably time to go do that grocery shopping I've been putting off all morning.

Be well. And thanks for listening.