Ugh, February vacation.
Otherwise known as- the week where you spend all your money entertaining your child instead of paying your bills. Geez.
Seriously.
And it's not like we did anything spectacular, really. Just a trip to the local arcade hall one day (that's an easy 30 bucks), the local roller skating rink another day (another easy 30 bucks, between skating, snacks, and laser tag), and the University rec center for some hoops another day.. lots of driving around in the gas guzzler...For a single mom on a fairly fixed income, it adds up quickly and takes big bite out of the budget.
And I'm still (yes, still) playing catch up from Christmas. I know, that was purely self-inflicted. No one but myself to blame for that.
Transfer money from the rent checking account to the bill checking account, try to make it up somewhere before the end of the month... Hope for some good tip days...
Sigh.

On the up-side, it was nice to have some quality time with the boy this week before he went back to his dad's yesterday. We didn't have an exciting week, but he did get to do some fun things, and we did have some mom-son time. And there was the whole- not having to set the alarm thing. For once, I wasn't waking up at 4 am every morning. I actually slept in three days this week. Odd. Although, I was making it up on the other end. I wasn't able to fall asleep at night. I saw 1 am more than once this week. Oh well.

I can't stop thinking about the tragedy that befell us this week. We lost another friend in a snowmobile accident. He was only 49. I saw it on the news earlier in the week, and I thought, dear lord, I hope it wasn't someone I know. Sure enough, my friend and former boss got in touch with me that night. And I knew right away it was about that...
Him and I weren't best friends, but we were friends. He was my friend. We had known each other for many years, and we knew each other well. We were close for a few years, and then not. Our relationship ebbed and flowed over the years, as many friendships do. We dated briefly in the midst of it all, and remained friends even afterwards (which is more than I can say for the majority of the men I've dated). I don't think most people realize that, actually. We were fairly quiet about it. Not that it was a secret or anything.. Well, I guess it's not now, lol... I had actually never spent the night on a boat before. Sad, but true- Grow up in Maine and never slept on a boat in one of our many beautiful lakes. And I can say that I have now, once in my life. And I have him to thank for that memory.
Anyway, I digress...
I can't bring myself to talk/write about the accident. I've read about it. I've read his son's accounts of it. His best friend (and my close friend)'s description of it.. It makes me sick. It makes me cry. It makes me so angry. It makes me question, as I always do when tragedy strikes, how life can be so cruel and unforgiving. I can't make sense of it. I can't rationalize it with any of the idioms that we use when death takes someone we love... "it was their time, the lord called them, the good die young, god had a plan for them, life had a plan for them"..., blah, blah, fucking blah. All I can be is angry.
And sad. Sad for him. For me. For his son, his daughters. His grandchildren. His closest friends.
As poor as I am now, I have taken Saturday off to go to his celebration of life. It is important for me to go. He was a big part of my life, too, perhaps not in these most recent years, but still, in my life. I have so many fond memories of him. Some not so fond, as he could be the biggest pain in the ass!
... Dancing with him, laughing with him, laughing AT him, begging him to stop singing (he couldn't sing to save his life), but man, he could dance! Him almost killing me in his truck (he liked to go fast, jeezus...), hugging him, smacking him, yelling at him, serving him his Bacardi or his Budweiser, arguing with him about his tab, laughing at him some more, yelling at him some more.. lol..
ADDENDUM
Yes, he pissed a lot of people off at times. Hell, he pissed me off at times. But it was because he was passionate about something. About a lot of things. And he was goddamn proud. And of all people, I fucking get that.
And I will miss his presence in this world. I will miss seeing him.
I will miss him so.

Anyway...
Back to the more mundane shit...

No change from the new med in the "mood stabilizing" department yet. At least, not that I can see. In fact, I think I've actually been more irritable this week. More on edge, so to speak. Not sure what that's all about. Although I'm not even up to the full dose yet, and I've only been on it for about 2 1/2 weeks. So I'm actually not even to the therapeutic range yet. Be patient, Crista. Which, if you know me, is NOT one of my redeeming qualities. In fact, one of the LAST words ever used to describe me would be "patient". So, anyway... I have, however, noticed fewer headaches, which is also something this new med is used to treat. So that is good. Unfortunately, I have one of it's side effects- pins and needles. Lots of it. Hands and arms, and legs and feet. And it's not subtle, it's absolutely driving me crazy. I am hoping that it will subside once my body grows accustomed to the medication. The new medication is also supposed to cause loss of appetite and weight loss, which I have also yet to experience. I'm still binge eating lots of junk every day. I'm hoping to get that benefit as my dose increases. Jeez. Another week and I'll be at my Doc's full dose, a couple more weeks and I'll see the new psychiatrist, and I assume he'll up the dose again from there. We shall see. Good times.
Someone once said to me- you sound like a candidate for medical marijuana. I laughed. Truthfully, I probably am. But I still don't like the stuff. Pretty strongly dislike it, actually. So, thanks anyway.

Well, that's enough nonsensical rambling for today, I guess. Gotta go get ready for work. You know, that one of two things that gives me purpose in life.

Speaking of the bar, I saw a funny thing on facebook this morning...
(and yes, I get the irony, seeing as how I paste a link to my blog on facebook, but I still had to share)... 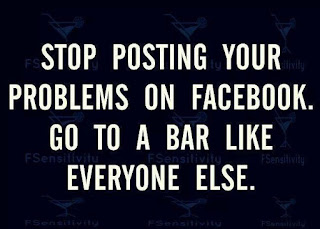 Have a nice day.
Be well.