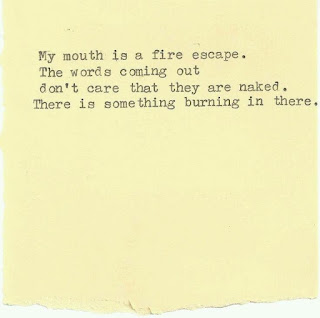 I saw that photo/phrase on Facebook yesterday. I thought it poignant, profound.
I'm always asked (usually by the significant other of the moment)- Why do you write? And why do you disclose such personal information??? The caption above answers those questions perfectly. I honestly couldn't have said it better myself (I may be an above-average technical writer, but I'm admittedly no good at creative prose).

And so, on with it. Hopefully, without offending anyone.

I am in the throws of this new romance. I say "new", because by relationship standards, it's still new, at only 4 months old. It's still in its infancy... (I love it's vs its.. the one time you don't use an apostrophe to indicate a possessive.. anyway..). What was I saying? Oh, right, the new relationship...
It's still in its infancy. It's still fun, and loving, and fresh, and quite consuming. And yet, it's also about at that mark when I start to look at it from a different perspective- the "where can this go" mark, the "what's next" phase... I know, I know.. Many of you would say I shouldn't be analyzing it this early on, I should just be able to "go with the flow", etc, etc... Well, that's just not how I'm wired. I am a "date with a purpose" kind of gal. It doesn't matter if it's fun, or that it passes the time, or that it fills a void, or that it brings me pleasure for the time being. At some point, fairly early on, it must show possibility of a purpose. And if there is no purpose, no potential, then it is probably a waste of time, energy, and emotion, for all parties involved, and should be severed, as to avoid even more discomfort later on.
And, in this instance, this relationship doesn't seem to have the potential to be anything more than it is right now. "It doesn't seem to" probably wasn't completely accurate... It truly doesn't/won't proceed to the "what's next" phase. And it has been discussed, and (mostly) agreed upon, and understood between the two of us.
Sigh.
I won't go into detail, because that would just be too much disclosure. But believe me when I say, there are some very real and significant (and inflexible, fixed, unchangeable) reasons as to why.  And so we carry on... Half the week spent together, enjoying one another, quite enraptured, wishing we had more time... Trying not to think about the "issues", trying not to think about it possibly (likely?) being only temporary. And then half the week spent apart, missing one another (sometimes to the point of misery), living our lives, going about our business, our children, jobs, lifestyles, etc, with daily texts and the occasional phone-call.
And so I continue compromising my principals, going against what is logical, and quite possibly the "right thing" to do.  Because I am crazy about him.  Because in four short months, he has become a huge part of my life, even though only part-time. He's filled a space in my heart, grown there like some persistent pretty little flower that is rooted too deep (or deeply, either can be a proper adverb in this instance) to weed. Filled a dark empty spot with something new and bright and beautiful.
Sigh...
So, what the hell to do?!?! "Go with the flow?" Continue on, enjoy it, assuming that this will be enough to sustain for us both? Or let it go, before more time and emotion is invested, and allow us each the opportunity to find "more" from a relationship, from life.
Conundrum.

At this point, my coffee and blogging was interrupted by the desperate pleas of my 13 year old son... Emergency, emergency! It's the last day of school and he had forgotten to bring the giant candy bar he bought for his favorite teacher. And since I needed to go to the town office to register my Jetta anyway, I rode in on my giant green monster (mom's excursion), and saved the day.

I then proceeded to register my new (transmission-troublesome) Jetta, where I watched three registrations get processed to my one. Evidently I got the new girl. I had not had enough coffee for this, and so my time spent there was quite painful.

And now I'm back at my desk, fresh cup of coffee in hand, wondering... "where was I?"...Oh, right, the relationship stuff...
I feel like I've written enough for today. I don't know what else to say. It's difficult to write about, think about, look it in the face and see the reality of it. But perhaps that's exactly why I am writing of it.
Sigh.

One last very relevant thing, though... Throw another person into the mix, one who I planned on spending forever with, and also love very much, who wants a reconciliation, and the plot thickens to the point of excruciating insanity.


Imagine for a second, that you had to willingly sever one of your own limbs. An arm, maybe a leg. Just cut it off. Lose it forever. No one could save you the discomfort of choice or the internal struggle and cut it off for you.  You had choose a limb, and you must sever it. There’s nothing wrong with that limb. It’s not diseased or infected. But you have to do it.
I can function without that limb. I know that I can. But it doesn’t ease the pain of severing it. I just want to be able to move on now, somewhat handicapped, and find some form of happiness.

I remember saying back then that it was one of the most painful positions I'd ever been in, and how I hoped to NEVER again experience it.
Well played, Universe, well played. Screw you.