Well, today was the day. As I mentioned already on Facebook...
I shuffled into the courtroom with the rest of the "uncontested" folks, where we all waited for our turn to be called. Two by two we stood in front of the judge and answered "yes" when he asked if both parties want to dissolve their marriage. Then we all went our separate ways, saying things to ourselves like- "For every ending there is a new beginning".. Or.. "This is the first day of the rest of my life".. Or.. "When one door closes, another opens"... And we say them over, and over, and over, until we believe it. And maybe we will. Maybe those idioms will help us forget our failures.

How surreal today was... Both of us sitting there in front of the judge, answering his questions, quietly weeping, doing away with our vows quicker and easier than when we spoke them.
And then we were given the opportunity to sign a waiver that would make our divorce effective as soon as the judge signed and filed the paperwork, within about a week, as opposed to waiting the three week appeals period. And the husband declined to sign it. I assume it was because we still have some financial arrangements that he may want to appeal if we do not come to an agreement on them within the next few weeks. Who knows. Before today, it may have been because he had some idea that we could change things. And, I'd be lying if I said I hadn't considered it. We had spoken of it these past couple weeks. Regardless of the new path of my life (and his), regardless of how this was "the right thing to do", it's not easy letting go of such a history. And what can I say- I'm only human.

But today, after our hearing, something came to light that changed everything. And I will have to leave it, vaguely, at that.  But now I know, that IF I had even REMOTELY entertained the idea of some future other than this, it is no longer even a possibility or option. It is removed, as it probably should be.
Sometimes, if you're having a hard time closing a door in it's entirety, the universe comes along, and helps to seal it shut for you. And even though you know it's the right thing, and you are grateful for the intervention, it somehow doesn't make it any less painful.
And then there is the sense of failure, in general.

And everyone says- knowing when to say enough is enough, is not a failure. But isn't it? If not this divorce, than the other two? Really, is this an adequate explanation for all three times I've been divorced? And not only divorces.. I've been engaged before as well, or in long-term relationships; relationships that never quite made it to the marriage part. What about those failures-that-weren't-failures? This history of mine causes such pessimism, misanthropy, questions of self worth... All of these failures-that-aren't-failures... I can't help but think, I must not be a keeper. I'm no good at this. Maybe I'm broken. I'm not relationship type material, at least, not the type that sustains. I have yet to be "enough" for anyone... good enough, kind enough, loving enough, supportive enough, intimate enough, smart enough, motivated enough... I could just keep going on and on. And all the arguing or kind words in the world won't help; just take a look at my track record fah fahk sake. 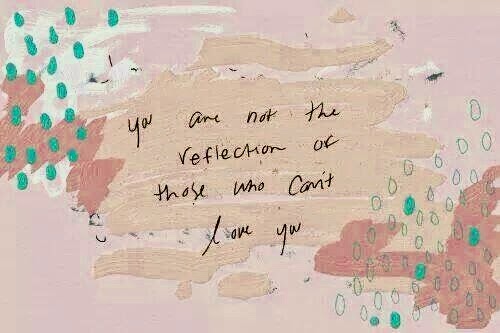 I saw this quote weeks ago.
I saved it for moments like today.
Yet, I have such a hard time believing it.

Now I will try to move on, cleanly and entirely. Enjoy my new found freedom, my new life.. Be allowed to emotionally invest 100% in my new relationship. Try not to taint it with my bitterness, my scars, my cynicism. It shows such promise... But then again, they all do, in the beginning.
And, if there's anything I've learned from love in these last couple decades, it's that, nothing lasts forever.