5 Great things about yesterday (since I didn't write):

~I got a huge notch taken out of my "to get" list. Like new glassware, fry pans, plates, and bowls.
~My very sweet hairdresser (and friend) squeezed me into her very busy schedule for a trim.
~I made another batch of soap and dropped it off with Stacie (who sells it throughout the Cianchette building at EMMC), and picked up money from the batch she just sold.
~Soccer last night with Dawson and Mom
~Cuddling in bed, watching tv, and falling asleep with Dawson

Still no word yet on the job. I got antsy this morning and emailed the human resources lady to check the status... She told me that the office manager had a late interview yesterday and had not gotten back to her yet with a decision, but that she would let all the candidates know once she had.
So there is still hope. Fingers still crossed.

I have several resumes out, and I just keep sending them.
Something will come along soon. The cap to my Jones soda said so. 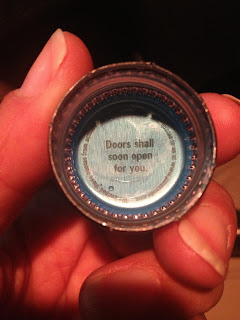 One thing I haven't talked about lately is my meds and the looming potential for a bipolar diagnosis. I had talked to my doc about weaning off my meds a few months ago. And so we tried it. I started feeling a bit more touchy, so I went back up on the dosage (this was shortly after dad passed). Oddly, I ran out shortly after going back up on the dosage, and forgot to refill. By the time I did refill, I had been off the Depakote for a week. So I decided to try just not going back on...
I've now been off the Depakote for a little over a month. And doing okay, especially given the circumstances. I'll have another follow-up appointment with the Doc in the near future, and be kept "in the system" just in case.
I feel very good about this. I was never convinced that medicating was the answer to my problems. But it seemed everyone around me did. For years I resisted. I finally began trials of mood stabilizers last fall, which eventually lead to the psych eval and the Depakote this year.
I never did know for sure whether or not there was a noticeable difference in how I felt, or in my demeanor. But my husband claimed there was. The only thing I noticed was that I felt "flat". Less impassioned. And yes, many true bipolars go off their meds for that very reason. And they get into trouble for it.
It's been a little over a month for me, and I haven't killed anyone yet. I jest. Seriously though, I haven't felt any differently. I feel pretty okay. "Normal".  :)

I spoke to my husband yesterday briefly on the phone about some minor details. I mentioned filing for divorce. "You're going to file??? ... I understand... But you're probably going to have to do it"...
This of course struck me in a strange way. Why would he be surprised?  In fact, I'm not sure why he wouldn't be jumping for joy. He did leave, after all. He already has a new place.  He did cite the numerous reasons he was so unhappy.  I don't understand. I'm sure I over-analyze.
Which doesn't help my mindset any.
Sigh.

Our one year anniversary is this Sunday.
Together for three years, and married for one.
And now it's lost. Just gone. Done.
Sigh.

Things are so strange here now.
Quiet, harmonious, unruffled, and generally okay, but still strange...
I often forget to be angry.
I miss him daily. I go to sleep thinking of him. I wake up thinking of him.
And dreamless sleep is a thing of the past. Some nights I skip the 75mg of benadryl, so I can just deal with the insomnia- At least that way I won't dream.
I have been trying to work on acceptance. And I'll tell you what, that's a tough one. The pain, the grief, the loneliness, the anger... as if all of that isn't enough... the acceptance part is just the cherry on top of the break-up cake.
Because one just never fully understands why.
You'll never know if the love you had was a big fat lie, or if the person you loved was just not meant for you, or if they just didn't love you enough, or if maybe you just didn't love them enough, or maybe this, or that, or some other fucking thing...